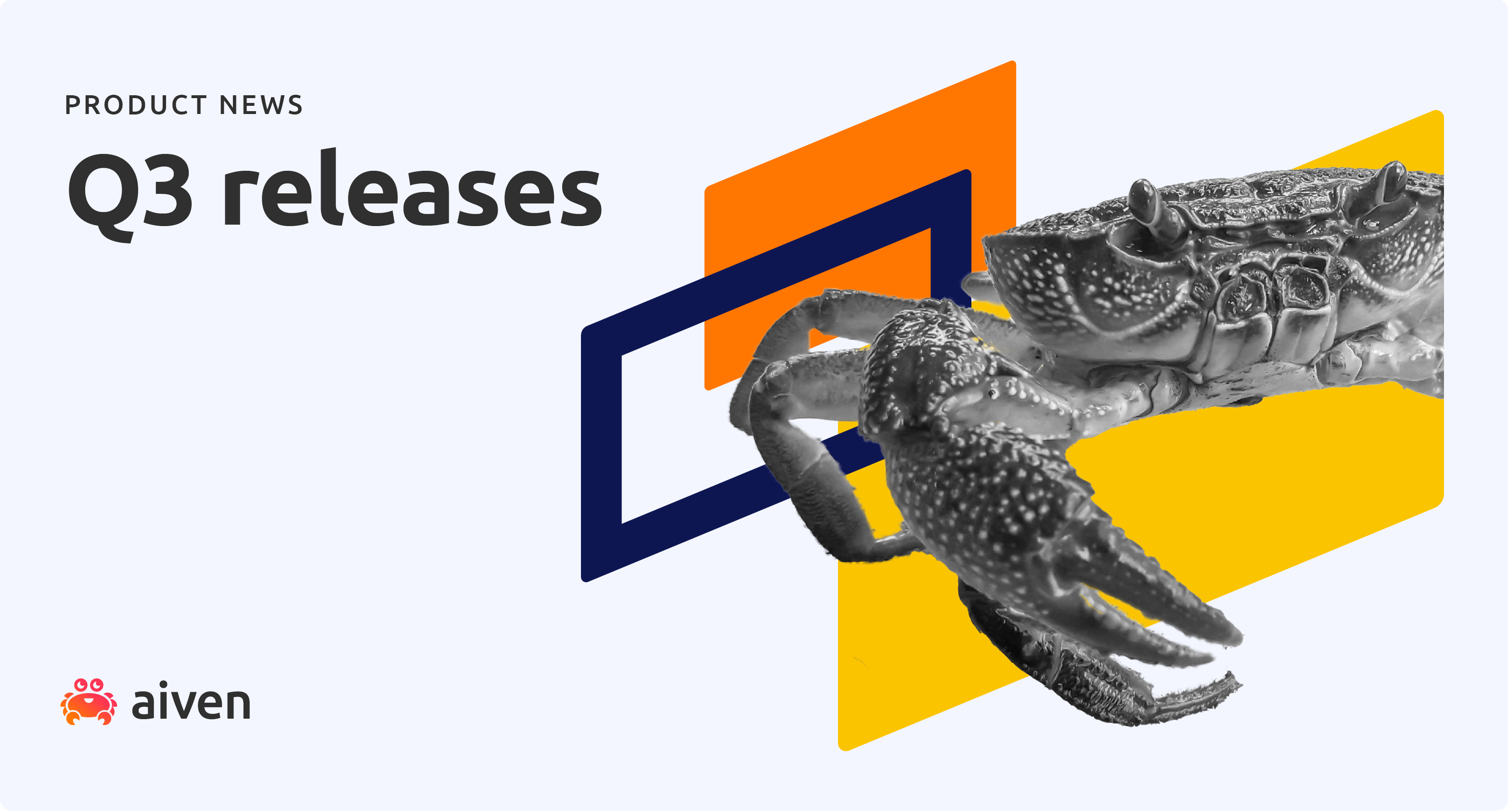 Mid-September saw the launch of Aiven for ClickHouse in its beta incarnation.

ClickHouse® is a fast cloud data warehouse that’s fully open source. It allows you to generate analytical data reports in real time using advanced SQL queries. ClickHouse is built to process hundreds of millions of rows and tens of gigabytes of data per server per second.

Aiven for ClickHouse is a fully managed service that makes it a breeze to deploy a new production-grade, high-performance data warehouse and enjoy the advanced capabilities familiar from other Aiven services - effortless scaling, easy database forking and cloud/region migration without downtime.

Aiven for ClickHouse also has built-in integrations for our other products, such as Aiven for Apache Kafka®, Aiven for PostgreSQL®, and Aiven for Grafana®. This makes it easy for you to create analytics pipelines using both streaming data sources and the data in your operational databases, and to visualize the analytics results.

To find out more about what ClickHouse is and what you can use it for, head on over to our What is ClickHouse article!

Self-managed metadata based on KRaft

With the implementation of KIP-801, Apache Kafka 3.2 is moving away from needing Apache Zookeeper instances when Kafka users want to use AclAuthorize. Aiven is following this development with eager interest!

(Aiven for Apache Kafka already leverages our own fully open-source authoriser for Kafka ACLs which is already KRaft-ready.)

The addition of KIP-704 to Apache Kafka 3.2 minimizes potential data losses in data recovery. This applies to scenarios where the controller has allowed the use of the unclean leader election strategy, and the user has elected a replica in Apache Kafka that was not a part of the in-sync replica setup.

The last notable addition to Aiven’s Apache Kafka service from our upgrade to Kafka 3.2 makes listing your available connectors in Apache Kafka Connect a lot easier. Specifically, with the implementation of KIP-769, developers no longer need to dig into the specifics of the Apache Kafka Connect runtime: Connector plugins are now discoverable via the REST API, and their configuration definitions can be easily retrieved. This makes building streaming data pipelines significantly faster.

How to get started with Aiven for Apache Kafka 3.2

If you haven’t upgraded to the latest service version, you can easily do so with a few clicks in the Aiven Console.

Aiven for Apache Kafka® at your fingertips

Still looking for a managed data platform? Sign up for Aiven for Apache Kafka® and start streaming!

To find out more about upgrade paths and get answers to any questions, check out the release notes for the project itself.

At the start of September, the Aiven for Redis service upgraded to Redis 7. The most notable new features in Redis 7.0 include:

At the same time, a lot of effort has gone into making Redis even more performant and stable than before.

Redis Functions brings a new solution for scripting in Redis, allowing users to load custom function libraries to Redis. Unlike earlier ephemeral scripts using the EVAL command, which left management of the scripts to the applications, Redis now manages functions as an integral part of the database and ensures their availability through data persistence and replication.

ACLv2 adds two important new capabilities for access control lists, while maintaining compatibility with earlier versions:
Support for multiple sets of ACL rules - called selectors - that are evaluated independently.
The ability to set access type permissions to specific keys. This way you can exclusively limit the user to read-only, write-only, or read-write operations to a subset of the keys.

Note that ACLv2 is not yet available in Aiven for Redis®, but we are working on it and expect to release the functionality soon.

Redis version 7.0 adds almost 50 new commands and options to support the evolution of Redis, and to extend its existing capabilities. Also support for new data types have been added. For more information, take a look at their release notes.

To get the latest news about Aiven and our services, plus a bit of extra around all things open source, subscribe to our monthly newsletter! Daily news about Aiven are available on our LinkedIn and Twitter feeds.

If you just want to stay current with our service updates, follow our changelog.

Still looking for a managed data platform? Sign up for a free trial at https://console.aiven.io/signup!