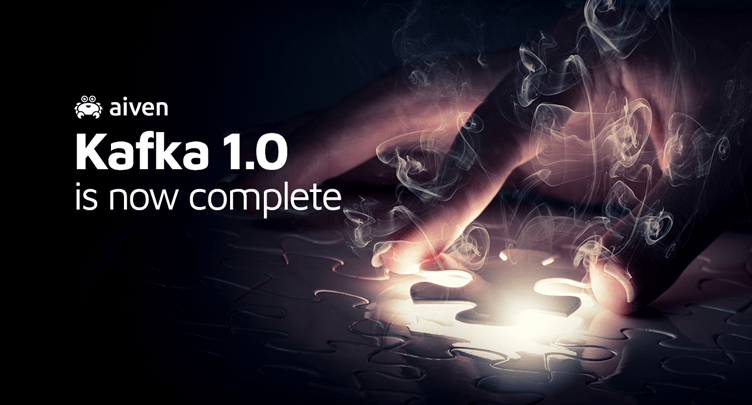 After seven years of development, Apache Kafka released version 1.0.0 this past November.

Neha Narkhede, CTO of Confluent, stated that it represents a "Completeness of our vision."

That's a pretty big statement and is representative of 1.0.0 not merely being a version change, but something bigger. Let's look at Aiven's take on some of the highlights of the version release.

You can get more information about the health of your Kafka service because of the increased granularity of the available data.

This will help Kafka gain more traction in enterprise deployments as there's better visibility into its inner workings. Aiven Kafka will be making these metrics available to you in the upcoming weeks.

By reducing unnecessary snapshot file deletions, restarts after an unclean shutdown are up to an order of magnitude faster than before.

This improves recovery times in situations where things have already gone wrong.

Why both are important: improved resource management equals improved stability and performance.

Aiven ensures that Apache Kafka 1.0 is ready for production use

As excited as we are for new releases, they are rarely ready for production use out of the box and Kafka 1.0 was no different.

Most notably, there was an issue surrounding memory leakage that needed to be resolved.

After much work from the community, we have now made Apache Kafka 1.0 available on the Aiven platform.

If you are a current client and wish to upgrade to Kafka 1.0 earlier, feel free to do so by clicking the maintenance upgrade button within your customer panel.