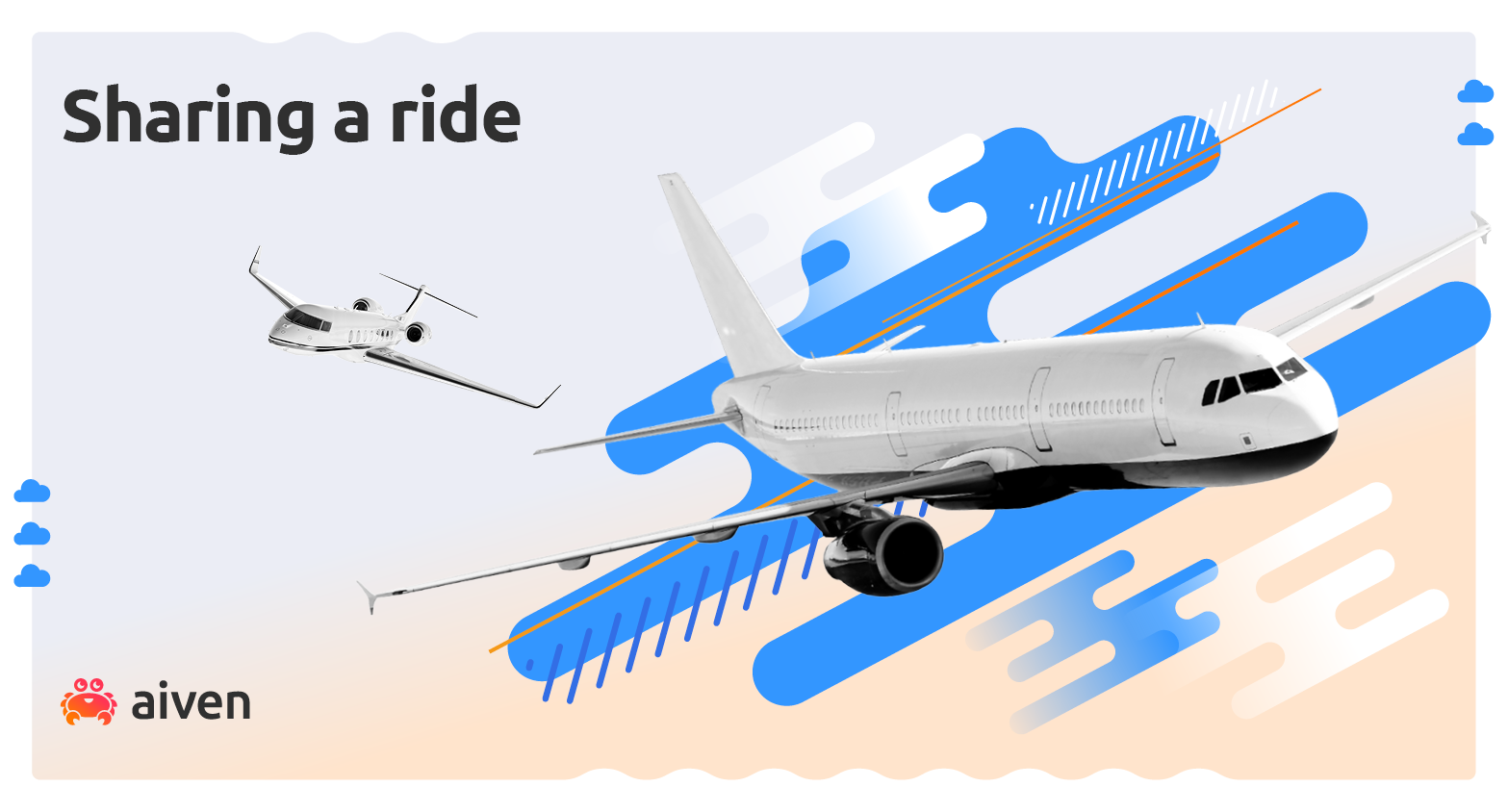 Recently Aiven conducted a market study, and one question asked about the respondent’s company’s current cloud arrangements. Given that we’re quite familiar with the terrain, we were a bit startled that 61% of respondents stated that their data was stored in a private cloud. The same held true even in industries where we were pretty sure that couldn’t be the case. 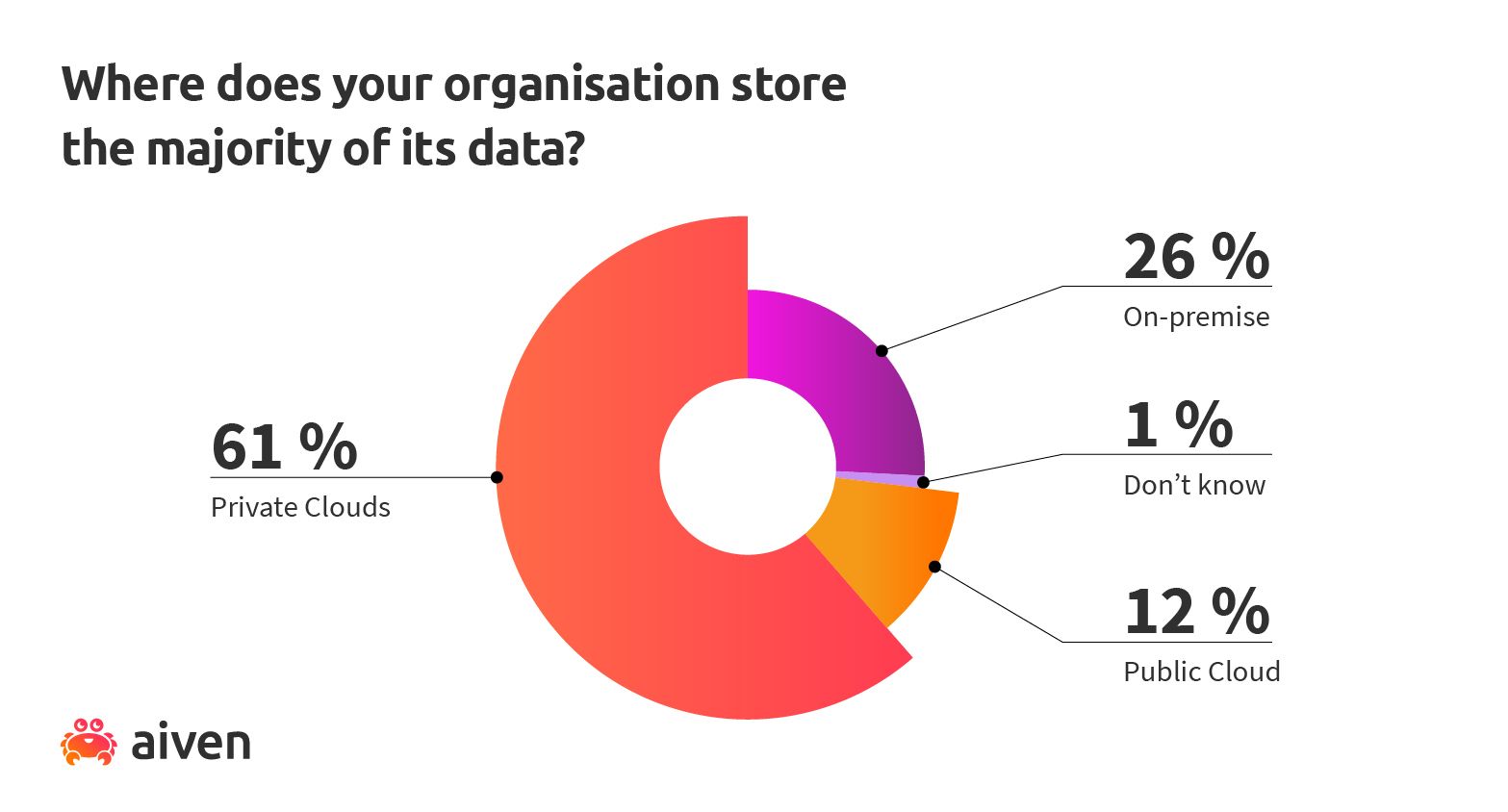 So we went back to take a critical look at what we’d actually asked. It turned out that the question was open to misinterpretation. Some respondents had perhaps made a finer distinction between cloud types than intended. Maybe they had talked about virtual private clouds, which we hadn’t provided as a separate option.

What is a public cloud? How is a private cloud different?

If your data lives in a public cloud, that doesn’t mean your data is publicly accessible, flapping in the wind. Similarly, if your data is in a private cloud, it doesn’t imply that the data is permanently hidden from outsiders.

Instead, a public cloud is a service that is made publicly available by the company providing that service. A private cloud, in the meanwhile, is a cloud created by a company for its own use.

Think of it like a public airline versus a private jet. Anyone can fly on a public airline if they buy a ticket. Even so, members of the public can’t just wander onto airplanes demanding to be flown to Sydney or Berlin. Nor can they browse passenger manifests or make off with other people’s luggage. A private jet, on the other hand, is like a private cloud: you bought it, you pay for its maintenance, you employ a pilot or fly it yourself. In exchange, you can furnish your jet how you wish, have complete privacy, and fully control who else can fly with you.

Yes, the terminology is confusing. It would make more sense to call public clouds “managed clouds”, for example. But what can you do, the term is out there.

So how does it work?

A public cloud runs on hardware provided by an external company. It uses networks and software provided by either the same company or one or more other companies. The user company purchases the service for a set sum. Depending on the service type, they receive access to the hardware, networking and software as well as the maintenance and upgrade tasks related to all those elements. Your data itself remains private, and the cloud company takes great pains to ensure that.

A private cloud, in contrast, runs on hardware, networking and software purchased, installed and managed by the company that uses it. This way, the company retains full control over who can access which parts of their data. They can also control the physical location of the hardware. A fully private cloud is something mostly larger companies find it feasible to maintain.

A mix of these two is a hybrid cloud. There some of the infrastructure is internal to the user company and some (for example, data storage) is purchased from an outside vendor. Hybrid clouds come in many shapes and configurations, and they all try to leverage the best properties of both types of cloud. The results are often, well, mixed. A hybrid cloud can end up being as expensive and complicated to maintain as a private one.

A virtual private cloud (VPC) is a pool of resources that lives inside a public cloud, isolated from all other VPCs. The resources in one VPC are reserved for one single organization and can be customized in various ways. It uses a private IP subnet and its parts communicate via a private communication network (like a VLAN). Remote access is provided through a VPN.

The effect is that of a cloud-in-a-cloud where no part of the resources of the VPC touches any other part of the cloud infrastructure. So the VPC is a private cloud… inside a public cloud. We count that as a public cloud, because we’re a cloud service provider. For our friends in other industries, though, it looks quite a lot like a private cloud, since no one else can get in, and when suddenly asked, they may well classify it as such.

We’ve written before about why we think managed cloud services are the way forward for most companies. Given that Aiven provides a comprehensive range of public cloud services, this opinion probably doesn’t come as a surprise. Our managed services are easy to get started with and simple to scale up or down. Step on board with us!