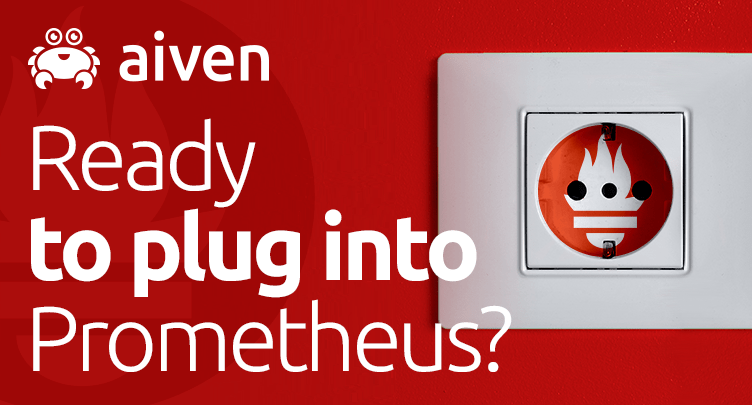 We are excited to announce our third metrics integration, Prometheus. Aiven users can now send their Kafka, PostgreSQL, Elasticsearch/OpenSearch, and Redis metrics to their Prometheus monitoring and alerting servers.

Modeled after Google’s Borgmon, Prometheus was released in 2012 and has quickly become the most popular Open Source monitoring and alerting tool available.

However, its popularity was just one of the reasons why we chose to support it as an integration on the Aiven platform. Its active community and features also made it an obvious choice as the next integration.

A number of characteristics make Prometheus a powerful tool, but perhaps the most significant is its query language. Among other capabilities, users can build complex alerts based on a number of factors off of this.

Additionally, its integrations allow Prometheus to receive and send metrics from popular databases like PostgreSQL, as well as a number of other sources, such as visualization tools and messaging systems.

This makes sense because Prometheus is highly capable, but not always the best option for certain functions. For example, although it can be used as a time-series database, it is not ideal for long-term storage.

The same goes for visualization. Consequently, it is best used as a monitoring and alerting tool in combination with components such as TimescaleDB for long-term, time-series storage and Grafana for visualization.

Prometheus’s delivery model and its side benefit

The metrics delivery model of Prometheus uses a pull model where the server connects to HTTP servers running on the monitored nodes and pulls the metrics from them. Because of this approach, the metrics are available not just for Prometheus but for any app that can read the Prometheus format from the HTTP server running on Aiven nodes.

How to get Prometheus and integrate it

If you are already using Prometheus and would like to connect your Aiven cloud Kafka, PostgreSQL, OpenSearch or Redis with it, visit our help article on using Prometheus with Aiven services.

We are excited to offer Prometheus as an integration option for our users. This is due large in part to our community’s active feedback on what they’d like to see from our service offering; so please, keep giving it!

And stay tuned for even more updates. In the meantime, be sure to subscribe to our changelog and blog RSS feeds, as well as our Linkedin and Twitter accounts to make sure that you always know the latest with Aiven!