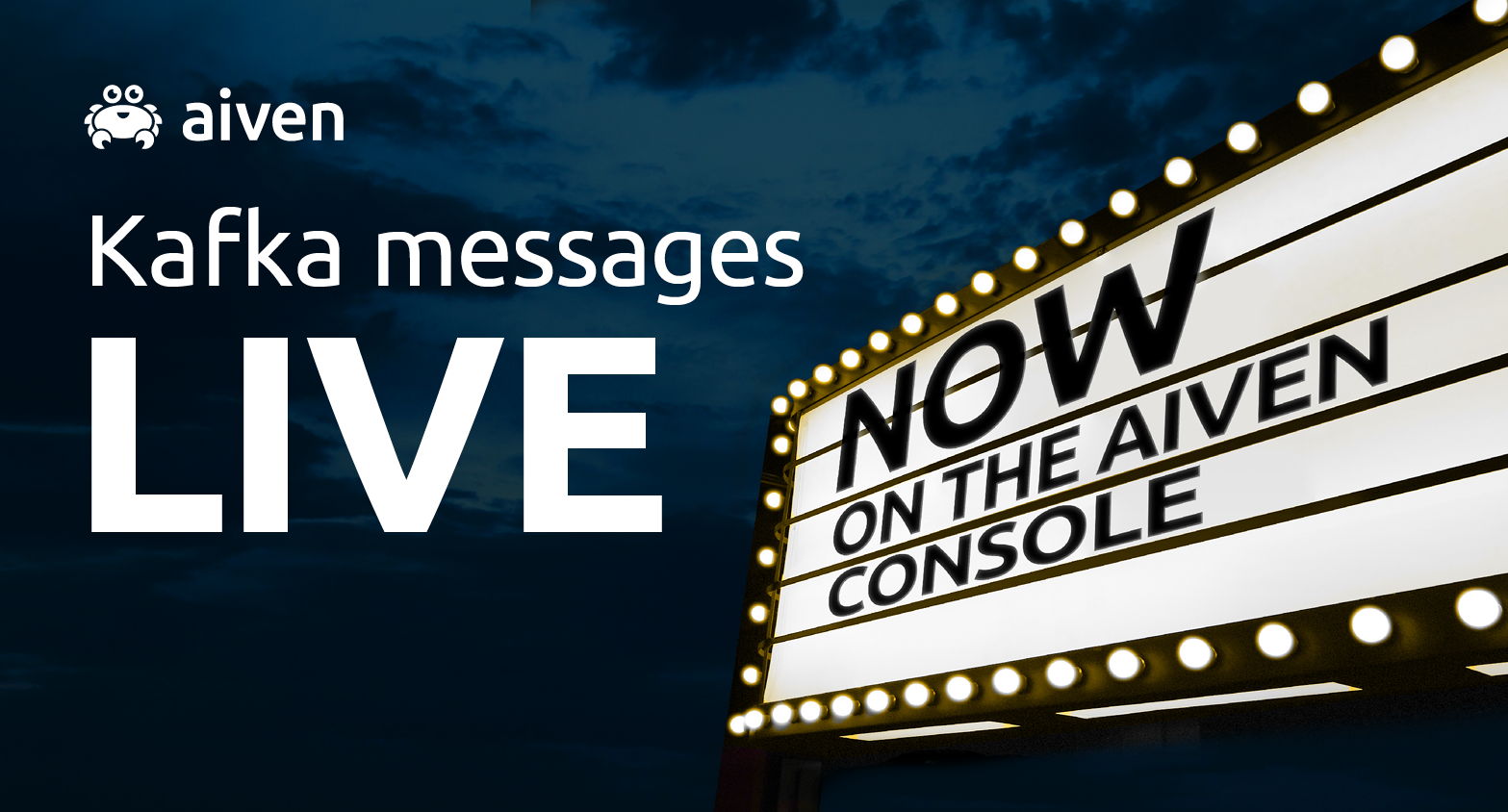 Apache Kafka users need a quick and easy way to view the state of their message queues and see if recent messages are being ingested correctly. Previously, you’d have needed external tools, monitoring systems, or APIs to view messages residing on a specific Kafka topic.

Now you can view Kafka messages live in the Aiven Console.

Viewing the message queues dynamically in the console allows Aiven for Apache Kafka users to get a feel for their data, as well as troubleshoot their event streams, content and schema.

The message-viewing feature comes with the ability to sort messages by location, partition, offset, timeout and maximum size. This adds simplicity and provides a degree of granularity useful for troubleshooting complex message queues.

How to use Aiven Console to produce and view messages

Messages written to Aiven for Apache Kafka topics appear under the Topics section of your Kafka instance in the Console. Let’s generate a few messages to show how the feature works.

Viewing messages from the console

NOTE: You’ll need an Aiven for Apache Kafka Business-4 plan or better to see Kafka messages in Aiven Console. And you’ll need to enable Kafka REST API to use the feature, as follows:

In the “Topics” tab on Aiven Console, create a couple of topics, for example jsontest and other_topic:

</span> icon in the jsontest topic row — this will expand the message view window.

Next, press the <span>

</span>. Once you are looking at the message view again, just hit <span>

Here’s how that looks altogether:

Of course, the messages would also appear here if you’d piped them in from a producer, or used, for example curl to generate new messages to your topic. (You’d simply press the <span>

The ability to produce and fetch messages from within the Aiven Console makes it a lot easier for Kafka users to test their clusters, event streams, and topic configurations. These troubleshooting tools remove some of the guesswork and extra tooling needed for users to get a feel for their data as it moves through their messaging queue.

Aiven for Apache Kafka is a work in progress, so we’ll always be adding new features. Remember subscribe to our changelog and blog RSS feeds, or follow us on Linkedin and Twitter to stay up-to-date.