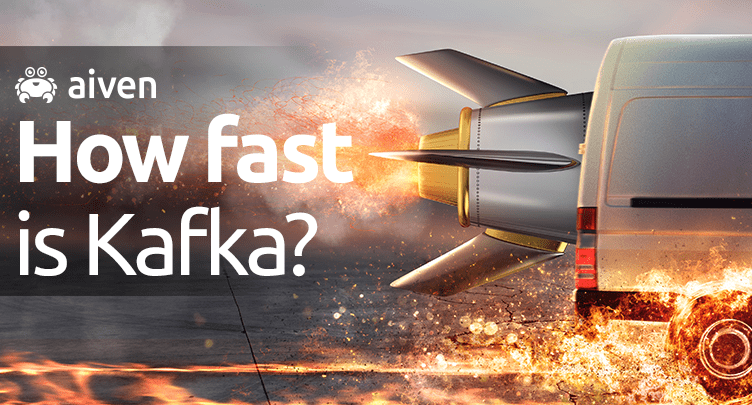 Back in 2017, we published a performance benchmark to showcase the vast volumes of events Apache Kafka can process. Natural to Aiven services, we evaluated the performance across the public cloud providers we supported.

A number of changes have been made to Kafka and the resources that the public cloud providers offer since then. As such, we felt it was a due time for a refresher and decided to remeasure write performance in this test.

That said, we made some small changes to the benchmark set up so that it better reflected real world workloads. We also calculated the monthly throughput cost for each plan, on each cloud this time. So, let’s jump in!

As with the previous test, we really wanted to estimate the true performance you’d expect from using Aiven Kafka. That is, we used standard Aiven plans and configurations, standard client configurations and ran the test over the external network interfaces.

But this time around, we’re using a replication factor of 3 to match the regular use case. With replication, this test accounts for the network traffic between the brokers as well.

We used a single topic for our write operations with a partition count set to either 3 or 6, depending on the number of brokers in each test cluster. As the test clusters were regular Aiven services, the partitions and replicas were spread out across availability zones.

Messages were produced via the librdkafka_performance tool with a message size of 512 bytes, a default batch size of 10,000 and no compression. Continuing our quest to simulate real-world use, client connections were made over TLS.

We used Kafka version 2.1 running with Java 8; as a side note, it’ll be interesting to benchmark Aiven Kafka running with Java 11 in future tests because we expect Java improvements to positively impact its performance.

During the test, we kept increasing the number of producing clients until we reached the maximum throughput rate each plan tier’s cluster could accept. To verify our readings, we left the load running for some time.

If you’re interested in verifying our results, you can get the test code here. In our tests, we actually used Google’s managed Kubernetes service to easily scale number of load generating nodes up and down.

We first tested the performance of our Business-4 plan. That’s a three broker cluster with 1-2 CPU (depending on the cloud) and 4GB RAM per instance. On Amazon Web Services, this plan handled about 135,000 messages per second while the same plan on Google Cloud Platform and Azure handled around 70,000. 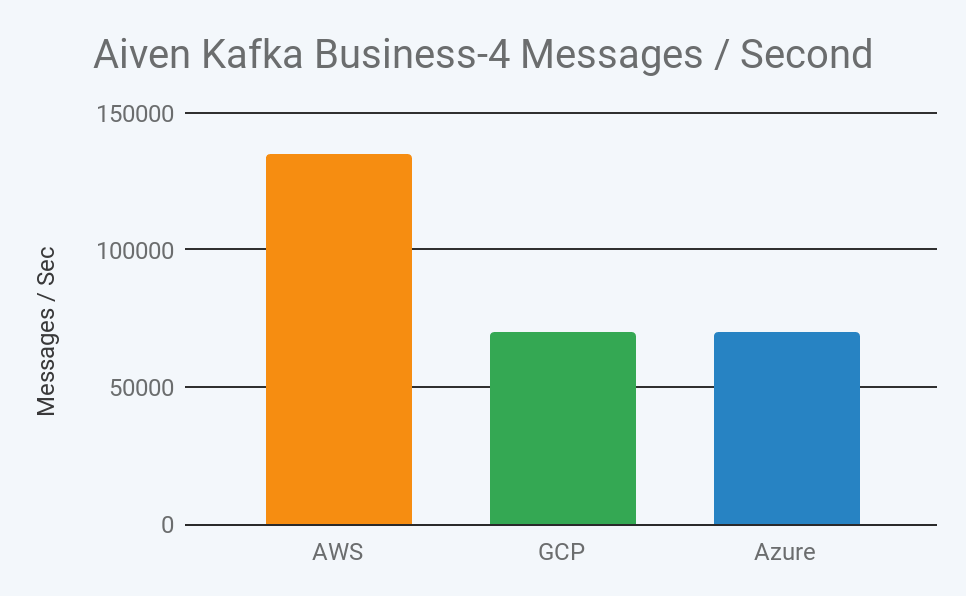 Since our previous test omitted replication, the somewhat lower performance of GCP and Azure can be explained by this test’s inclusion of it. Surprisingly, AWS’s performance jumped from 50,000 messages/second in the previous test to this number. This is explained by the more recent instance types and network improvements AWS has been fielding in their cloud. 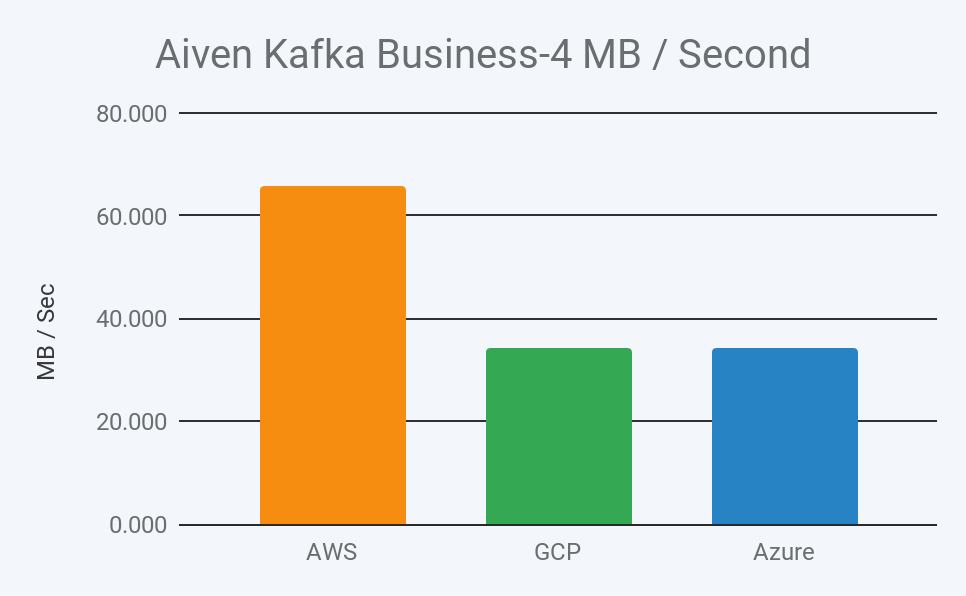 We then used the message rates to derive throughput numbers, which were over 65 MB/second for AWS, and just under 35 MB/second for GCP and Azure. Pretty impressive! But, what is the cost per performance? 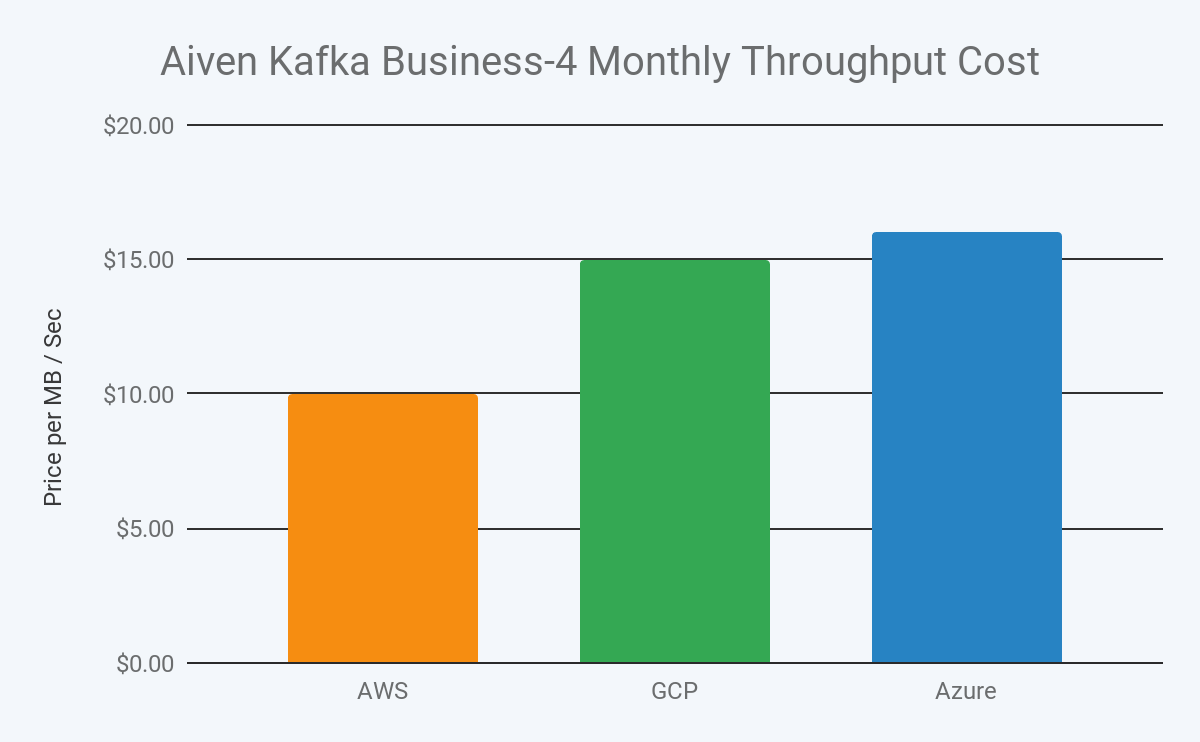 Next, we moved on to increasing the size of the brokers. The next test was based on Business-8 plan tier, essentially doubling the resources to 2-4 CPUs and 8 GB RAM per instance. This time, there was a slight increase in AWS to 137,000 messages per second, but larger ones in Azure and GCP to 120,000 and 95,000 respectively. 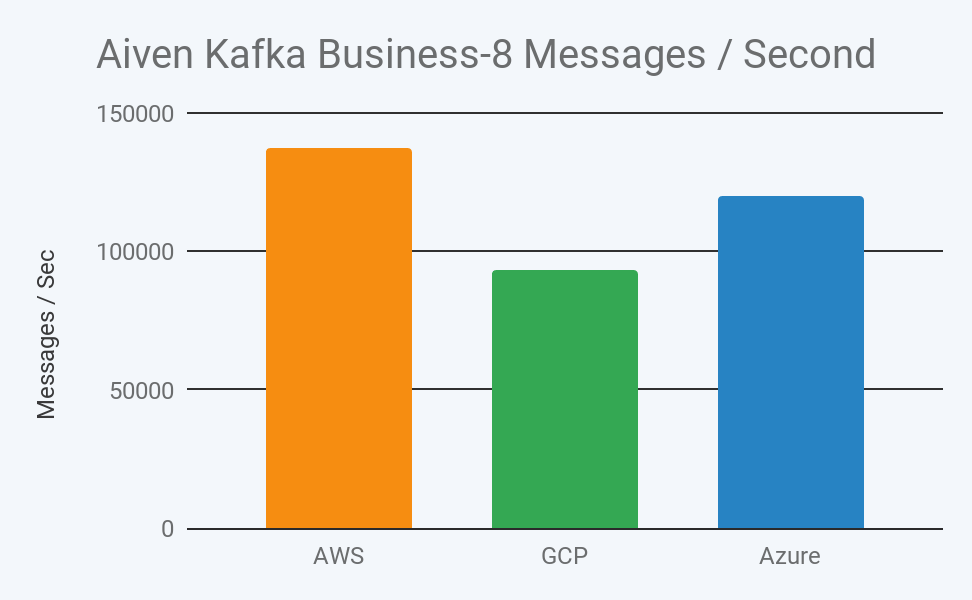 AWS performance didn’t move from the previous plan sizes. A look into our monitoring revealed that both tests were capped by the available network bandwidth on the broker instances.

Again, we used these same numbers converted to throughput: that’s 67 MB/s for AWS, 46 MB/s for GCP and 59 MB/s for Azure. 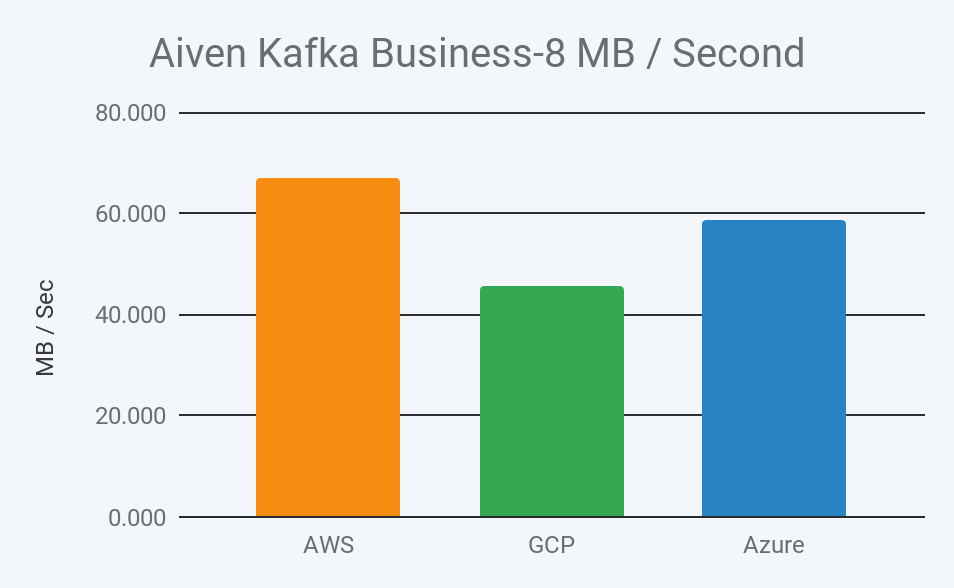 With the Business-8 plans, monthly estimated costs increased across the board at $19 per MB/s for AWS and Azure and around $22 per MB/s for GCP. However, it’s important to note that throughput is only one way to measure value. For example, Business-8 plans come with double the storage of Business-4 plans which allows for longer retention times. 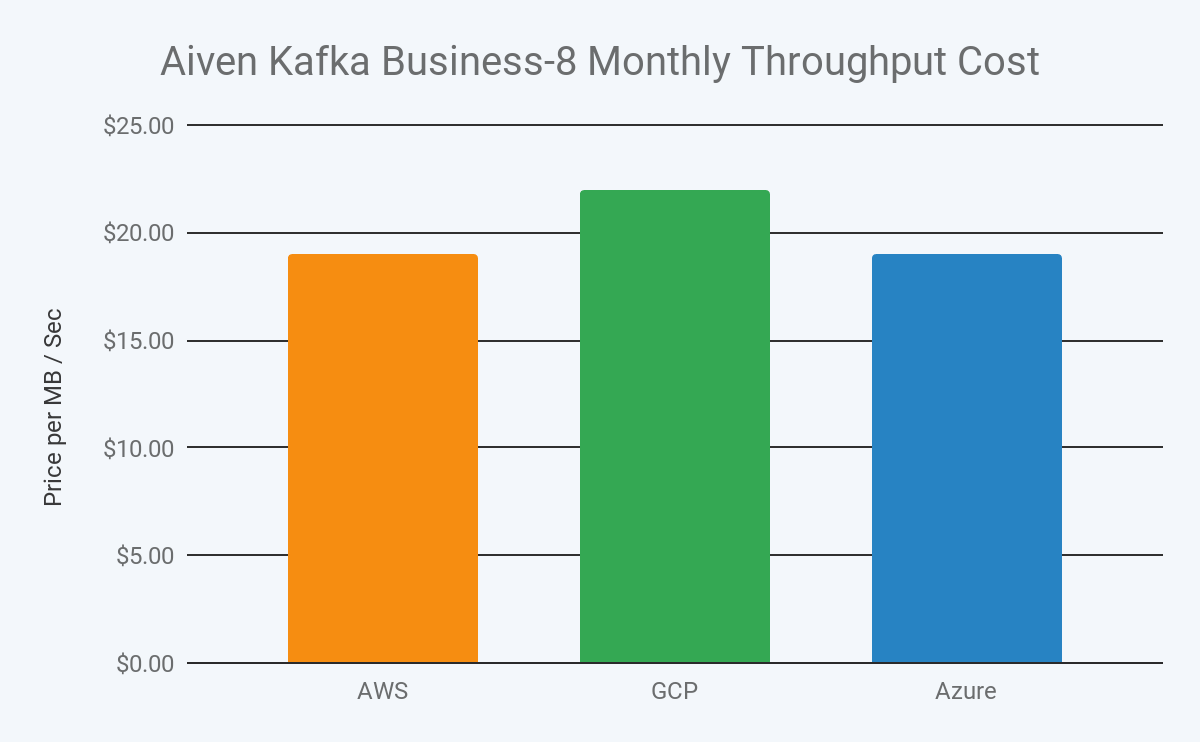 Our last test doubled the number of brokers. We wanted to verify just how well Kafka scales vertically - as it did quite perfectly in our previous round of testing. Thus, we ran this one with a six broker Premium-6x-8 plan tier, with similarly sized instances as Business-8. 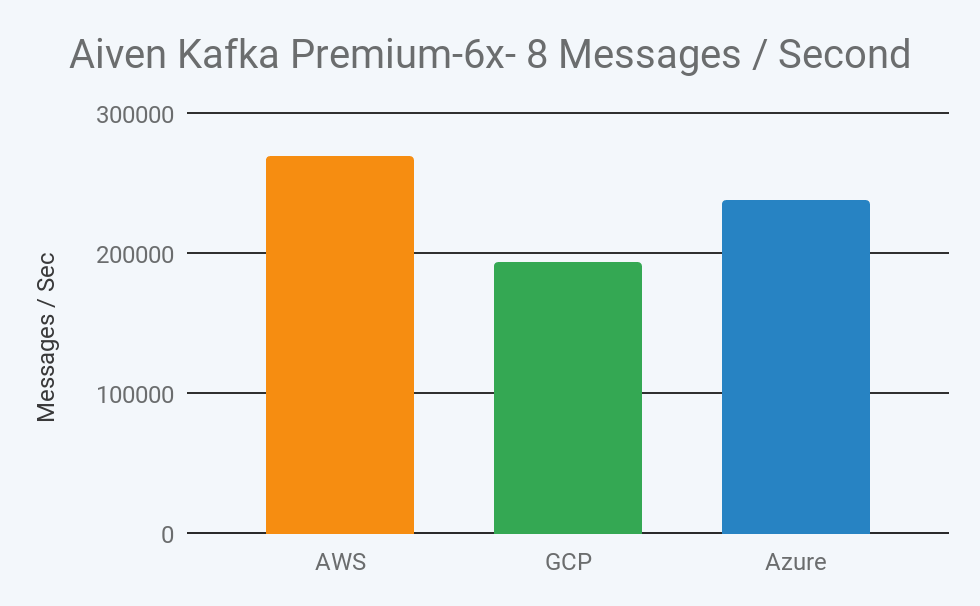 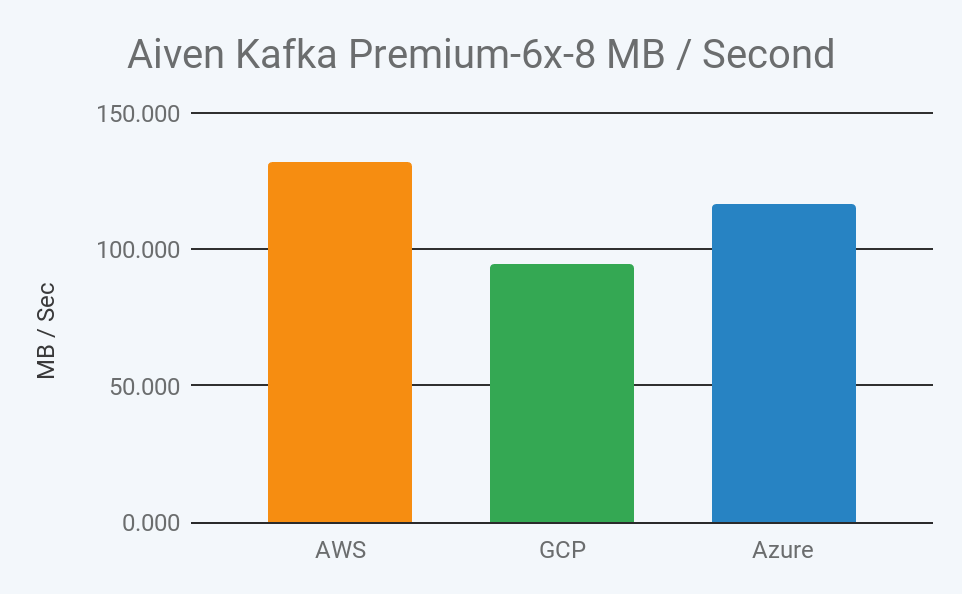 From the plan pricing, estimated monthly costs are around $19 per MB/s for AWS, $18 for Azure and $23 for GCP. 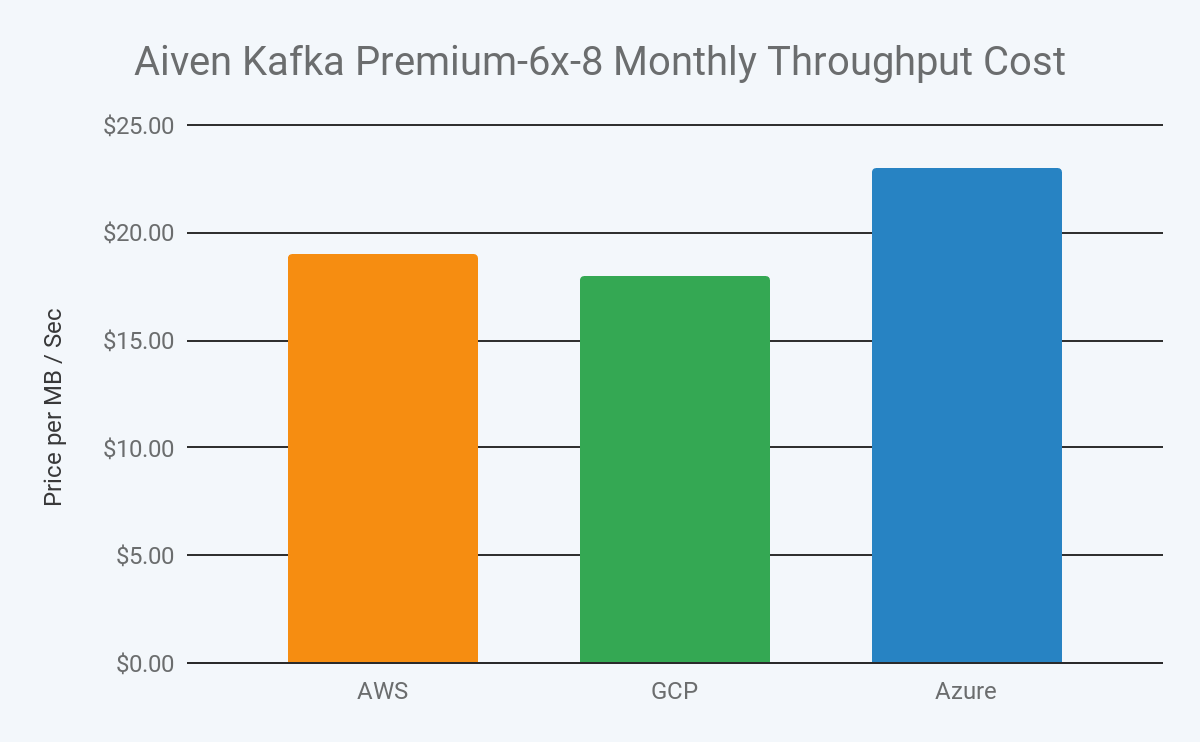 Apache Kafka continues to perform just as well as we’ve come to expect and scales nicely with both added resources and increased cluster sizes. It’s performant, scalable and cost effective — a solid centerpiece of the modern data architecture.

Again, we’d like to stress that monthly throughput cost should not be considered in isolation when comparing plans. Although important, there are additional factors that come into play when pricing plans, such as storage.

Additionally, we can’t stress enough that workloads vary and you should definitely benchmark your own representative event flows. For a more robust test, we’ll be addressing read/write tests in the near future.

Aiven Kafka is one of 8 integrable services offered on the Aiven platform. It’s a fully-managed and hosted Kafka service available in AWS, GCP, Microsoft Azure, DigitalOcean, UpCloud, and Packet.

After launching your Aiven Kafka service in minutes, you can rest assured they’ll remain operational, performant, up-to-date, and secure. Find out more about Aiven Kafka, keep up to date on our changelog, find us on social, and try the Aiven platform free for 30 days.